80sfashion.clothing is a participant in the Amazon affiliate advertising program. This is designed to provide a means for websites to earn fees by advertising and linking to products on their websites. 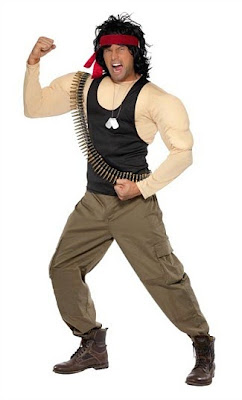 It would have been pretty near impossible to have made it through the 1980s without noticing the Rambo film series. Even if you weren't a fan, the posters featuring a well-toned Sylvester Stallone wearing a vest top and head band were everywhere, and the look became iconic.

To create a Rambo look the most essential items are the headband and vest top, although you could opt for a muscle chest instead, unless, of course, you have the physique to carry it off! There are many options available which I'll now discuss.

The offical Rambo costume includes everything you need including the aforementioned muscle chest and vest, along with trousers, wig, headband, bullet belt and dog tags. Of course, as with most official outfits the price can be out of some people's reach, particularly if you're only going to wear the costume once. However, if you want the best quality costume then it's probably worth paying that little bit extra. 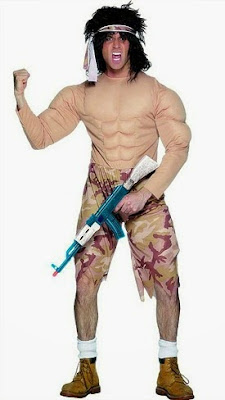 A cheaper option is this unofficial jumpsuit outfit which is, unsurprisingly, cheaper than the official one. However, the wig is not included, but you do get a headband. This outfit is available in two sizes and comes as a one piece padded jumpsuit with attached camouflage shorts .

You may want to create your own costume using separate items, or add additional accessories to one of the costumes above. I've managed to find a wide range of low-cost items which you may find useful;

An even cheaper alternative is this muscle chest Tee which is a simple, but very effective way to create a Rambo costume. Costume tees are very popular these days and given the price, it's not hard to see why.

Now, despite extensive searching on Google, it has been impossible to find a rambo wig with with a red headband. However, I did manage to find an alternative in the form of John McEnroe wig which looks pretty similar don't you think?

Back To The Future Costumes